The theme of RAKERNAS III PEREMPUAN AMAN  was “Strengthening the Leadership of Indigenous Women to Actualize Gender Equality and Justice.”

The activity was opened by singing the Indonesia Raya song together.  It was continued with a speech to report about the activity by the chairman of the committee, Yuyun Kurniasih. In her speech, she hoped that RAKERNAS III  could establish a strong relationship between the central management and the organizing committee.

Devi Anggraini, Chairperson of PEREMPUAN AMAN explained that the theme of “Strengthening Indigenous Women’s Leadership to Actualize Gender Equality and Justice,” was chosen to be a spirit not only for the national executive board, but it is also for the region ones.

This indigenous women’s organization is not a gift, but it is the result of the struggle. Even when PEREMPUAN AMAN was formed, there were still many rejections from various circles. However, the organization AMAN will be stronger in the future. 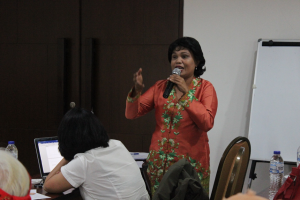 Being declared in 2012, PEREMPUAN AMAN was a forum for the struggle of indigenous Indonesian women who face a variety of violence, ignorance of their knowledge, identity and role in making decision and the seizure of indigenous territories. Through this organization,  all indigenous women in the archipelago agreed to fight for their rights and identities to actualize indigenous women who are sovereign over themselves and their lives.

At present, there are 18 organizing regions of PEREMPUAN AMAN and there are 20 candidate organizing areas that will be authorized  in RAKERNAS III. In the two years of Devi Anggraini’s leadership, 1650 indigenous women were consolidated in the organization.  At the end of her management, the members of PEREMPUAN AMAN will reach 5600 indigenous women who are consolidated into 195 organizing regions.